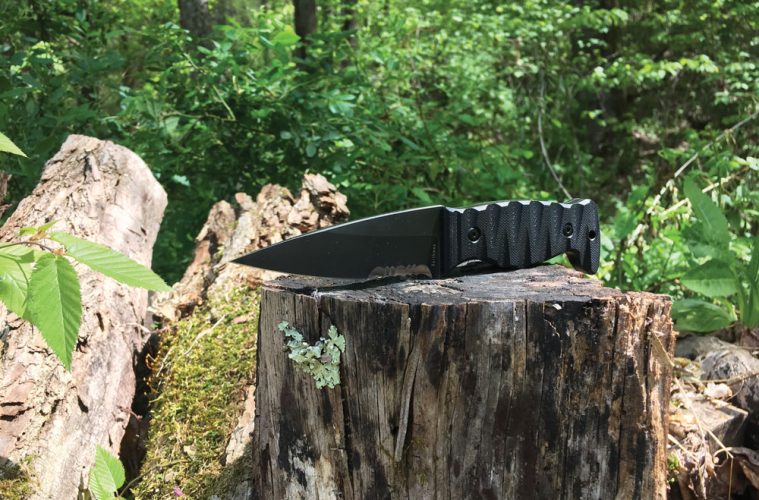 A great knife may not be great in every situation. The rural workman’s fixed blade with gut hook may look out of place in the glass-walled boardrooms of the big city, and a city slicker’s 3-inch gentleman’s knife with fine alabaster scales may not stand up to the farmhand’s daily job duties.

Likewise, it’s even harder for a blade to fill the bill of being a competent woods companion and a trusted battle blade. However, the Amtac Blades Northman, like its Viking namesake, can just as easily handle cutting through mountains and fjords on route to razing and fighting in the town square, as it can slice through cardboard boxes in the office mailroom.

The Birth of the Northman

Created by Bill Rapier, a sought-after shooting instructor at his school American Tactical Shooting Instruction (Amtac), the blade is intended to replace a regular EDC (everyday carry) knife. Since his courses often include the integration of pistol, carbine and blades, he was in search of something that would also fill a combative role. 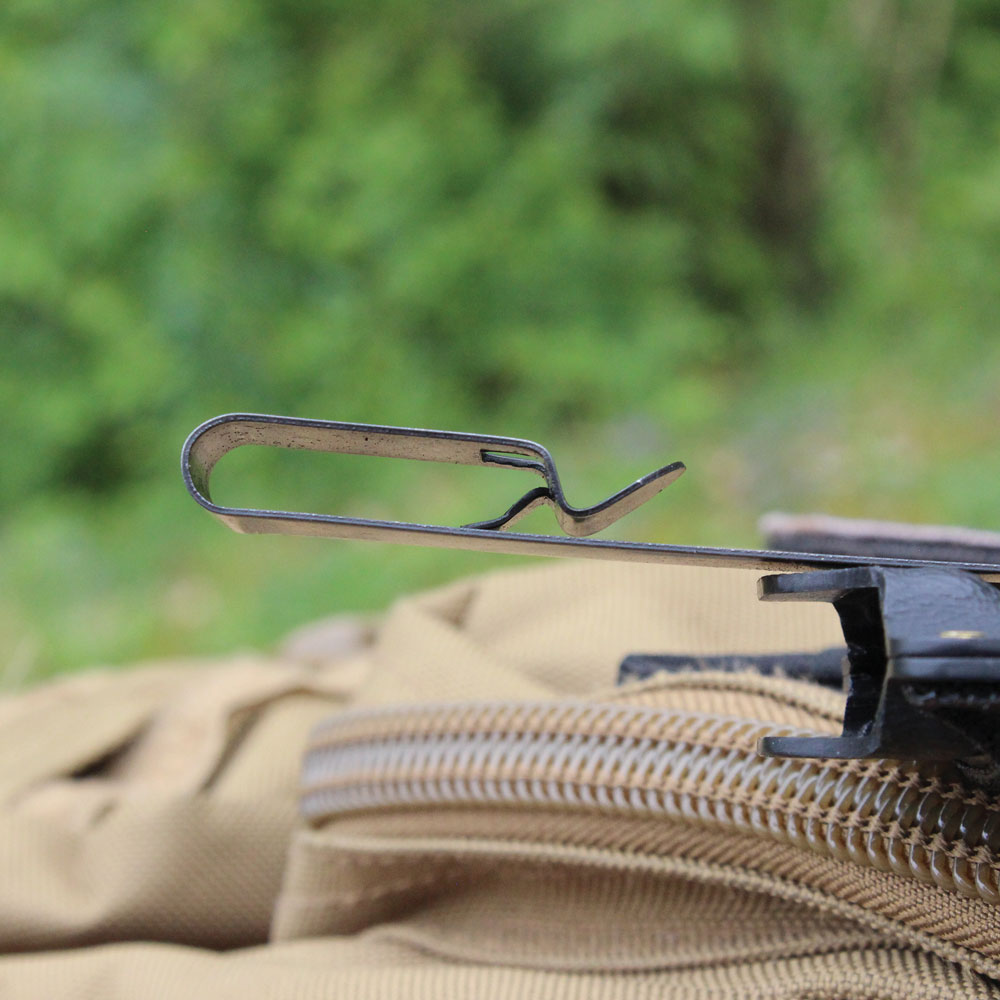 The Discreet Carry Concepts clip on the Northman Firesheath locks into the seam of the front pants pocket.

“I wanted a fixed blade knife that would reside in my strong-side front pocket with an inch or two of the pommel exposed. All other blades like this were deep-pocket blades,” Rapier explains, “so the re-sheathing would require two hands.” 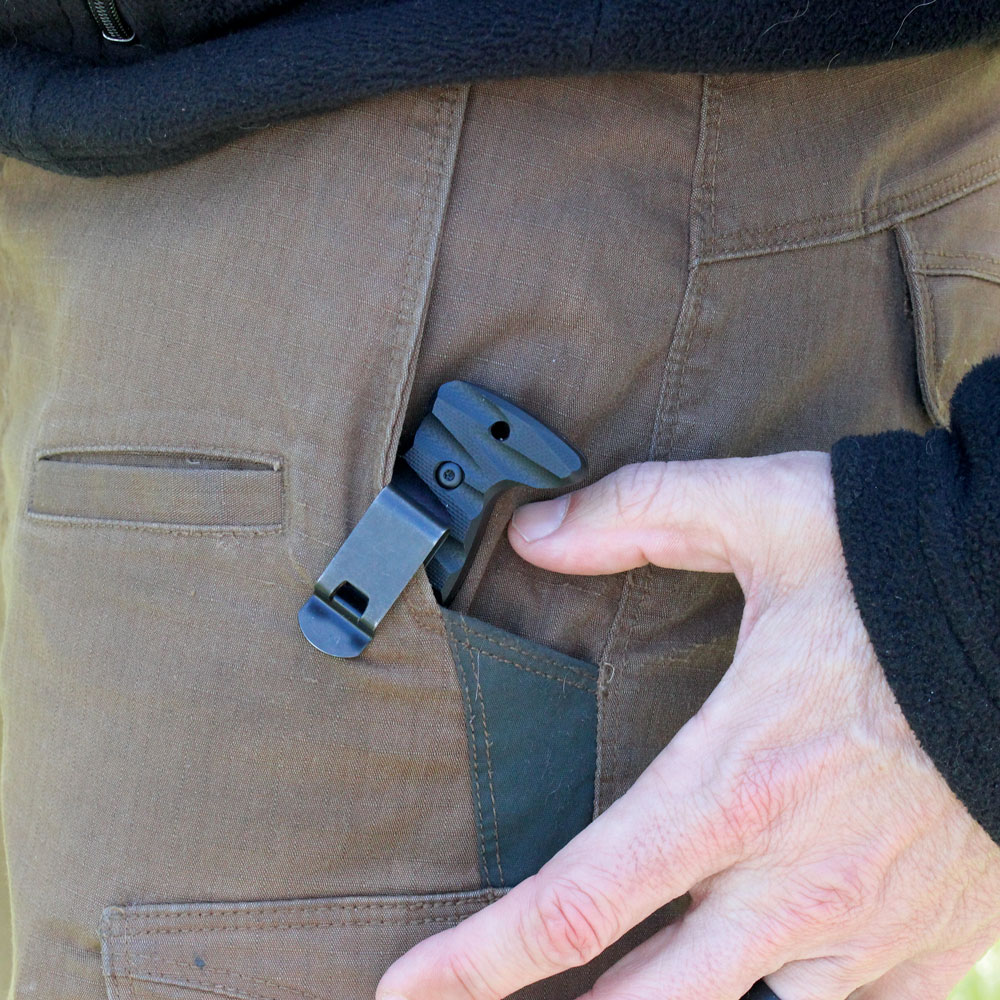 The Firesheath pocket- carry allows for quick and easy deployment

As a guy who spends most of his time outdoors, working around his mountain home or on skis in deep snow, he needed a blade with one-handed accessibility. The proposed design would also transfer easily to combative applications. Rapier approached a friend, known only as “Northman actual,” for help on designing the blade.

Within a few weeks, they had created the first prototype, which was put through extensive testing in the field. The collaboration continued with feedback from knifemaker and friend, Jake Hoback, and input from Tom Kier of Sayoc Tactical Group. The resulting knife became the Amtac Blades Northman. 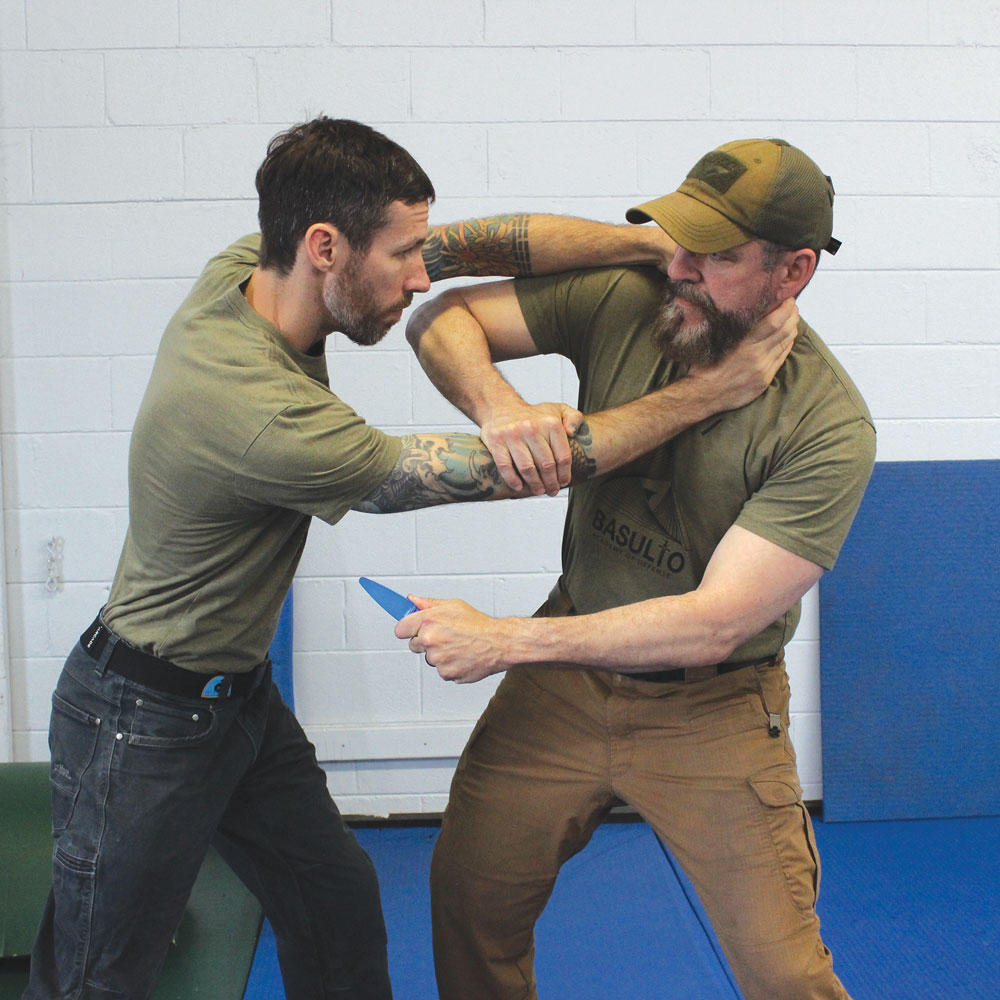 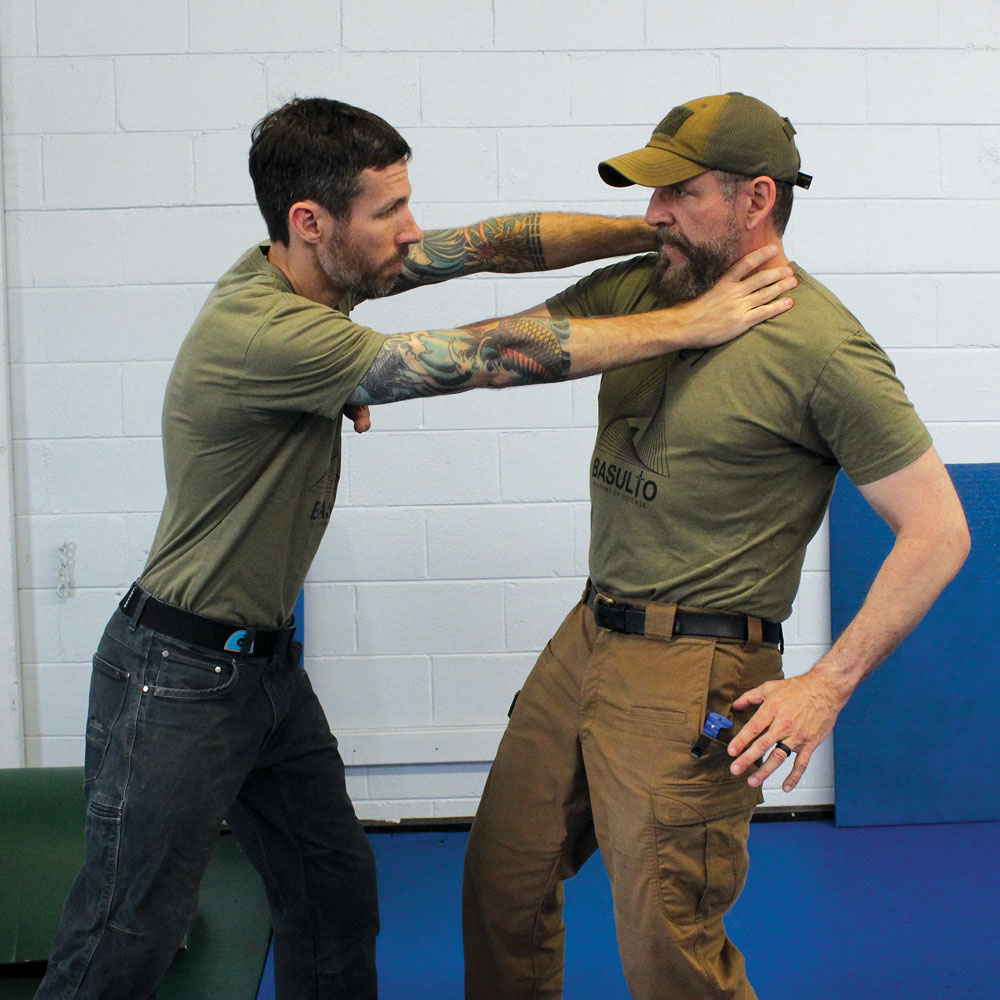 In a close-quarters defensive scenario, the Northman can be quickly deployed one-handed from the pants pocket

The Northman is, from inception, an easily accessible outdoorsman’s fixed blade EDC, designed to be equally useful in a life-and-death fight. It’s not meant to be a big survival or bushcraft specialty blade, but rather a go-to blade for basic tasks.

The choice of M390 steel is excellent for a workhorse blade because of its corrosion resistance and superior hardness, which makes it difficult to wear down. That same tough-as-nails hardness can make it a bit more challenging to sharpen for the beginner, but the edge retention on the Northman keeps it cutting through the roughest of jobs.

The Northman comes lightsaber-sharp out of the box and chances are you won’t need to worry about that edge going dull anytime soon. 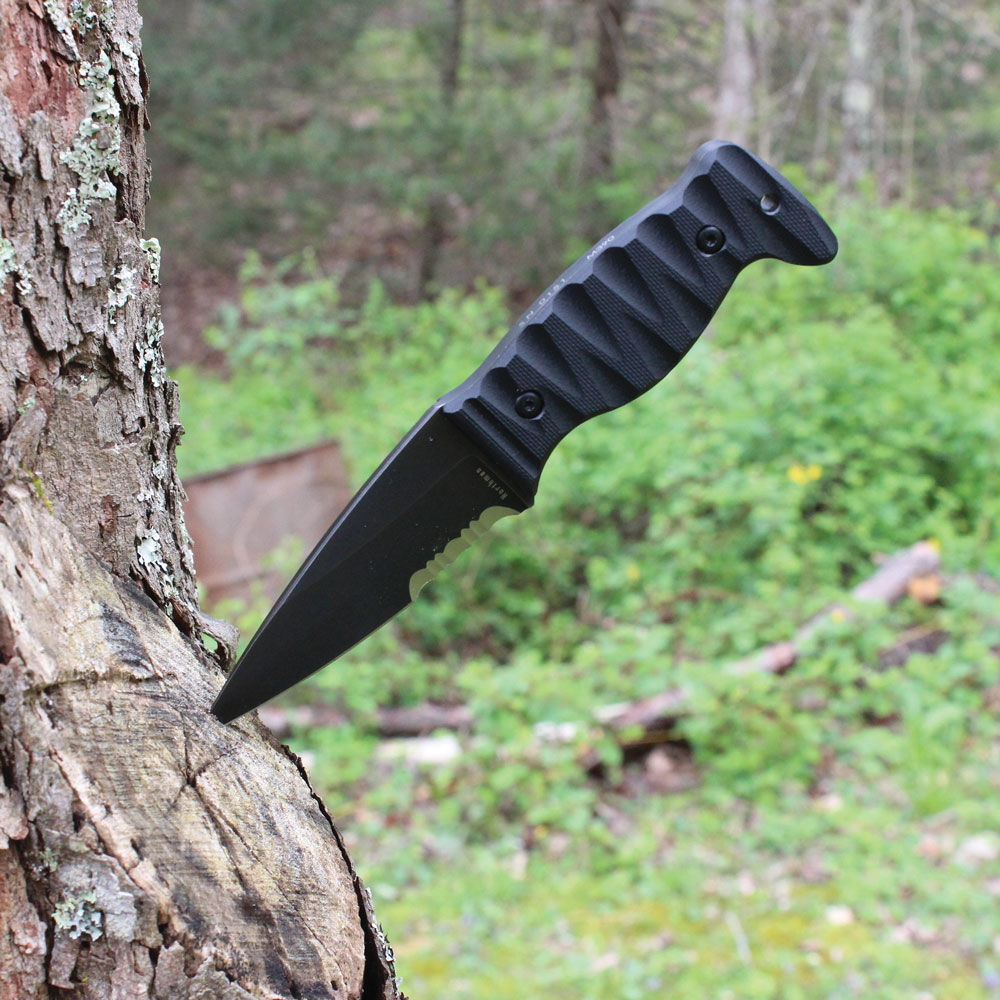 The Amtac Northman is an able woods companion

The sharp edge of the Northman provides 3.5 inches of cutting surface for slicing, dicing or slashing. This fine edge is great for precision cutting, tight corners, or even for camp food prep.

However, even though the M390 steel is tough and wear-resistant, it’s always best to save the Northman’s fine edge for when you really need it and instead opt to use the 1 1/8-inch length of the serrated edge for day-to-day chores that can be rough on blade sharpness.

The Power of the Sheath

The specially designed Kydex sheath is an integral part of the Northman’s utility. For ease of access, nothing beats reaching down to a front pants pocket to get a blade out for one-handed use.

The ubiquitous pocket clip has made this type of carry for EDC folders so common that it is in the muscle memory of anyone who carries a knife for work or hobby. The Northman Firesheath uses the same high-in-the-pocket accessibility and applies it to a fixed blade. 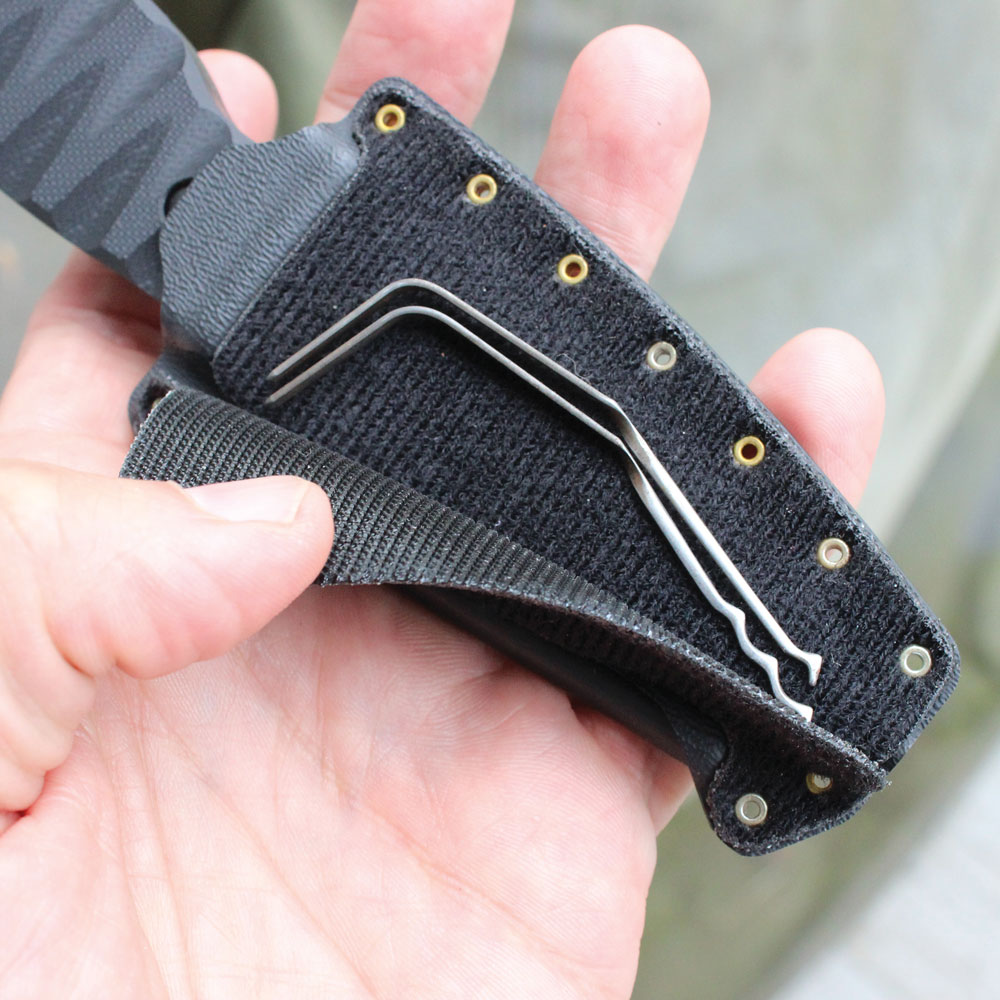 The Firesheath includes a concealed Velcro enclosure that can be used to store emergency tinder or lockpicks, depending on the environment

The Northman can be extracted and resheathed with easy indexing of the point against the pocket clip and clicks audibly with a snug fit. The specially designed Discreet Carry Concepts clip bites into the seam of the front pocket securely so the sheath will not extract with the knife when deployed.

To remove the sheath at the end of the day, the clip disengages easily with finger pressure on the inside spring. 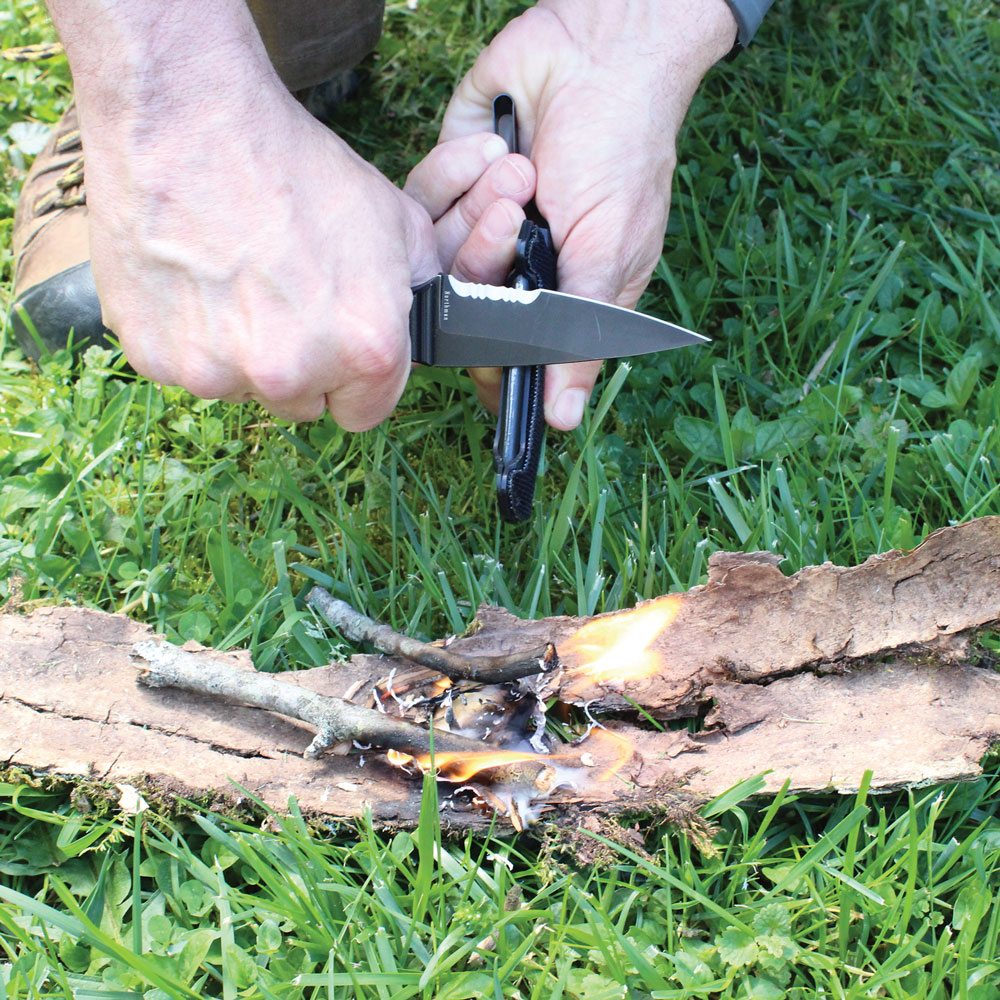 The Firesheath earns its moniker because of the inconspicuous integrated ferro rod that runs along the edge of the sheath. Gripping the sheath in a pinch-grip, the user can scrape the embedded ferro rod to create fire-starting sparks.

The backside of the sheath has two flaps of high-tension Velcro that sandwich together to create a hidden pocket. This pocket can hide either impregnated cotton/tinder for the woods, or lockpicks/handcuff key for urban survival.

A Trusted Companion in a Fight

Emphasizing the combative capabilities of the Northman, Amtac provides the appropriately sized and weighted blue trainer for live force-on-force training or for practicing drills.

The training blade feels identical to the actual Northman, and it fits neatly and snugly into the Amtac Firesheath. The user can practice drawing it from the pocket for defensive use or in conjunction with other weapons systems.

The trainer comes with its own storage sheath that can be used to store the “live blade” Northman when using the training blade. 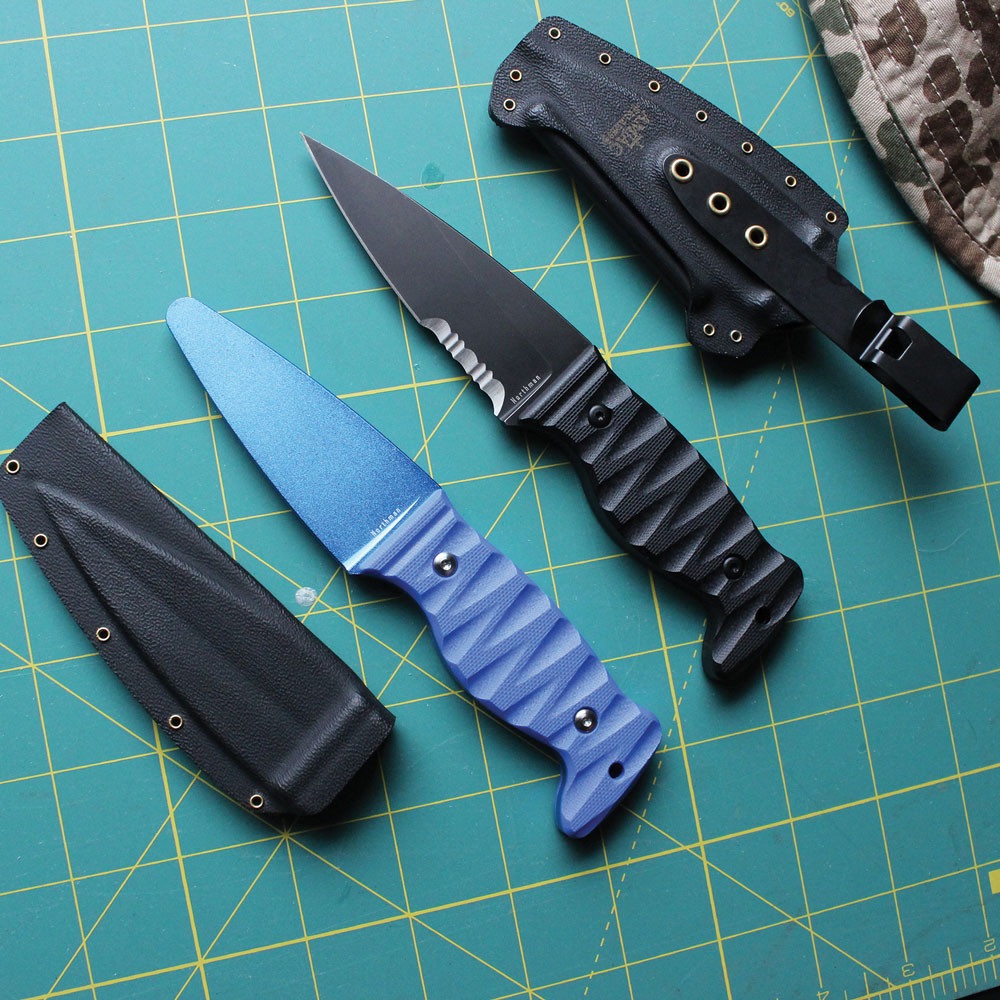 It is in the real-world fighting application of force-on-force training that the Northman earns its fighting credentials. Rapier notes that unlike traditionally carried edged weapons on the belt or in the inseam, the pocket-carry sheath system and small size of the Northman make it lightning-fast to deploy in a close-quarter fight. 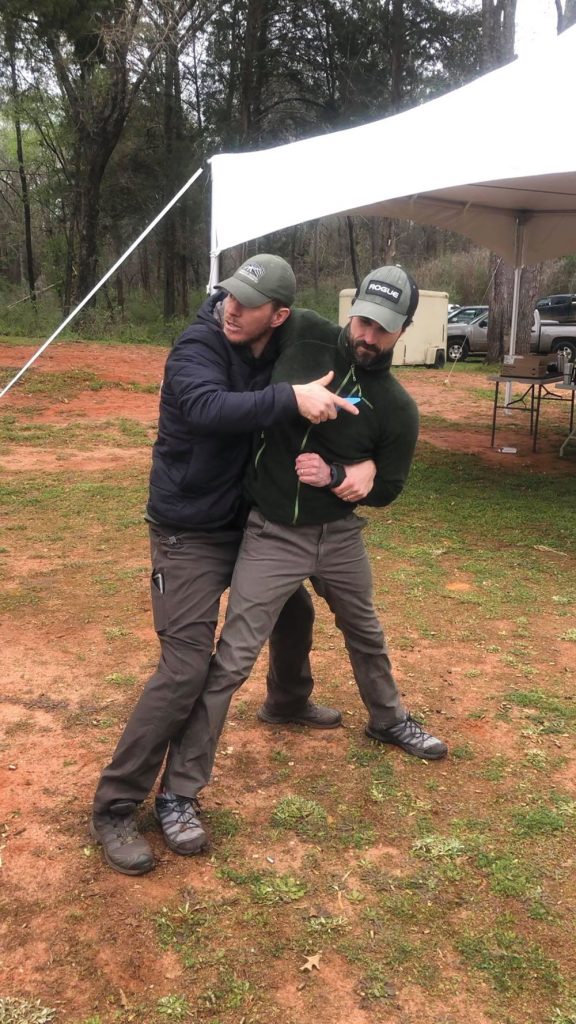 “If the tip of my long gun comes off line due to somebody using muscle strength, I just go right to that blade because it’s fast … faster than a pistol draw from concealment.” —Bill Rapier

“As I was teaching combatives, the knife just jumps out in your hand in transitions. If the tip of my long gun comes off line due to somebody using muscle strength, I just go right to that blade because it’s fast … faster than a pistol draw from concealment, ” Rapier noted when training with a rifle in tight quarters.

“If the tip of my long gun comes off line due to somebody using muscle strength, I just go right to that blade because it’s fast … faster than a pistol draw from concealment.” —Bill Rapier

“If grabbed around the waistline from the back to lift you, for example,” Rapier describes, “the Northman would still be accessible from my pocket.”

In hand, the Northman feels secure and ready for action despite its relatively small size. The fingers get a good purchase around the shaped handle and allow easy grip manipulation for delicate work such as whittling or for combative grip transitions. The generous pommel at the heel of the handle allows the palm to support the blade for thrusting or for punching holes.

“You can also get the Northman in ‘sterile,’ which has no branding, markings or serial numbers on the blade or sheath.”

As Rapier explains, “The Northman is great at thrusting,” because of its spear-point shape, size, and sharp, tough edge, “but that is why those serrations are on there. You use the serrated portion of the blade for work chores to save your fine edge from wear.”

Ready to Go to Work or Battle

Amtac Blades currently offers the Northman in several configurations. You can get the standard model with the serrated edge or opt to go with the full-length non-serrated edge. You can also get the Northman in “sterile,” which has no branding, markings or serial numbers on the blade or sheath. The sterile models are also available in serrated or non-serrated versions.

From dealing with the hardships of wilderness survival to toiling in the concrete jungle, the Amtac Blades Northman is the tool to have in your pocket. Whether that’s a city suit pocket or a countryside jeans’ pocket is up to you.

Who is Bill Rapier?

Bill Rapier brings real-world experience to blade use in the field and in combatives situations. Rapier spent 20 years in the U.S. Navy SEAL teams with the last 14 as a member of the Naval Special Warfare Development Group (DEVGRU). His military career included assignments such as assaulter, breacher, sniper, team leader, troop chief, and even time as military working dog department senior enlisted adviser.

His American Tactical Shooting Instruction school offers some of the most sought-after firearms training in the United States, with scheduled classes filling up as quickly as they can be announced.

Amtac courses not only cover combative pistol and carbine but also the integration of all weapons, including the blade. Courses range from Responsible Armed Citizen to Advanced Precision Rifle and Women’s Only courses. For more information on training, contact American Tactical Shooting Instruction at www.AmtacShooting.com.