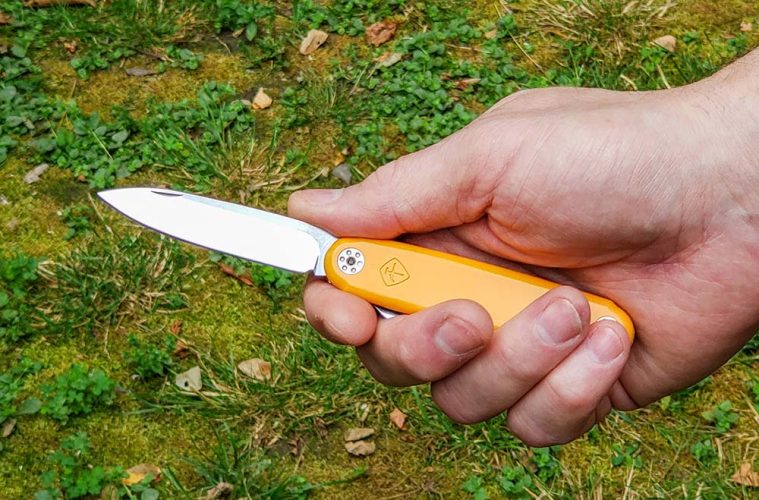 NEED A MODULAR MULTITOOL? THE AMERICAN SERVICE KNIFE IS HERE

Are you a fan of the classic Swiss Army Knife (SAK) but always wanted something a little more heavy-duty; maybe something with better steel?

How about getting to pick the tools that come on your knife rather than just choosing preselected features that were never quite what you wanted or needed? Well friend, if that’s you then it’s time you met the American Service Knife (ASK), a new project from Medford Knife & Tool.

There are people who have been modifying Swiss Army Knives for ages, but they aren’t really designed to be user-configured. You need some tools, a bit of know-how, and some skill to make a successful mod. And even if you do a great job with it, you’ve just voided your knife’s warranty if that matters to you.

Well, the folks at Medford want you to customize the ASK to your needs. They made it so that it can easily be taken down, tools and scales swapped out—all while still maintaining their lifetime warranty. Let’s take a look at what the American Service Knife has to offer.

“…if you’re someone who wants…something premium quality that’s tuned just for you, then the handcrafted, USA-made, American Service Knife is just what you need.” 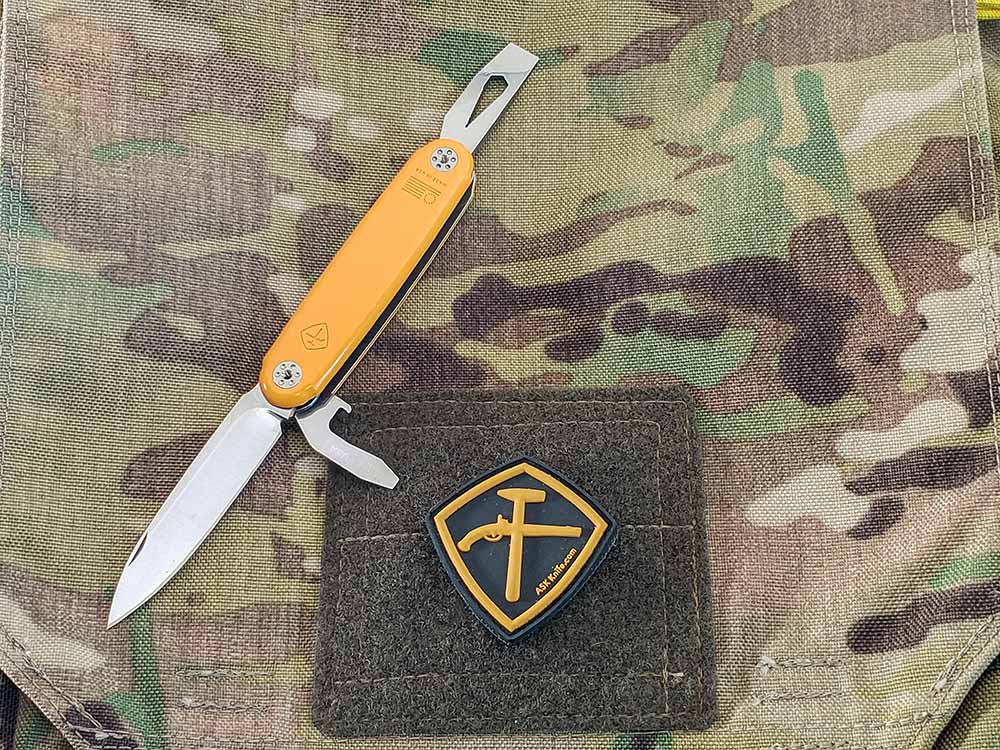 The American Service Knife from Medford Knife & Tool takes the concept of the basic multi-use knife and amplifies it with premium materials and complete modularity.

At this time, four standard ASK models are available. You start with whichever one is closest to your needs. If you find out you want to tweak it by swapping some tools around or adding a different blade, then you build off that base frame.

Currently, you can choose from four blade types: drop point, tanto, Seax, and Wharncliffe. A half dozen tools are available to choose from, too, but the list of available options will continue to grow as ASK expands the line.

Pocket clips and a carbide glass breaker are coming, for instance. Have an idea for a tool you want? Drop them a line and let them know. They’re open to suggestions, and you never know: If it’s something with merit, it could make the cut. You can pick from a variety of handle scales. Custom printed scales are available as well.

“…four standard ASK models are available.…If you…want to tweak it by swapping some tools…or adding a different blade, then you build off that base frame. Production-model ASKs will have blades of premium Magnacut steel.

While the basic concept and mission of the ASK is pretty much the same as a SAK in that they’re both multi-blade utility tools, the knives have some significant differences.

Material construction is one of the first areas that you see a major quality jump. ASK uses Magnacut stainless from Niagara Specialty Metal in New York, which is the latest steel hotness for good reason. It’s not just the blade that’s Magnacut either, but all the tools on an ASK.

Liners are made from titanium that’s mined in Ohio, and the plastic injection-molded scales are made in Scottsdale, Arizona with American-produced plastic. Even the titanium screws are USA-made. Every ASK is made from top tier, U.S.-sourced materials, and handcrafted at the Medford shop in Scottsdale.

Aside from the high-quality materials, the construction of the knife is more robust than the SAK’s, as well. The blade and tools are 1/8-inch thick, so in addition to better steel, you’re also getting a heftier blade and tool, as well. 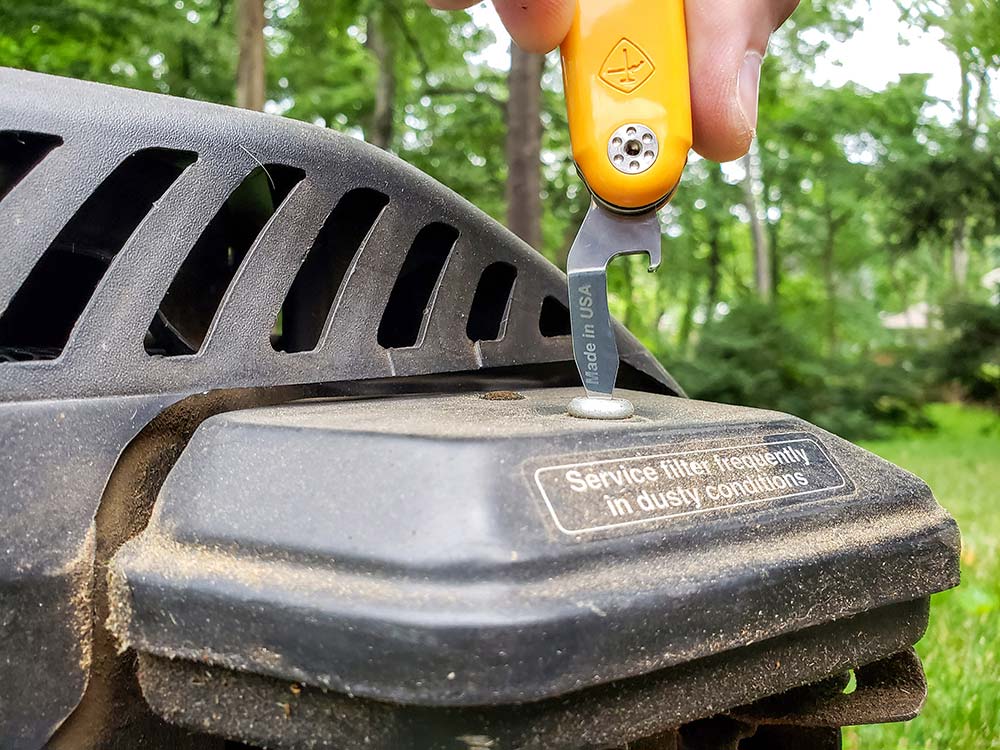 Having a couple basic tools on you is handy and can save you a trip back to the shop for quick adjustments.

The next big difference in the blades is the modularity of the ASK knife. It’s designed to be taken down and customized. If you’re like me, you’ll sit down at the work bench and start trying bits until you find one that fits. Or text your buddy when you’re stumped.

If you’re smarter than I am, you’ll notice the QR code on the packaging that takes you to the ASK website, which has some good videos on maintenance and configuring your knife. I definitely advise watching those first.

Once you’re up to speed on how to take down and reassemble your knife, the sky is the limit. Want a simple single-stack knife? No problem. How about a triple stack? That works, too.

What about a TSA-compliant tool-only version? You can do that as well. Basically, if you can dream it, you can do it with the ASK, especially as more tool and blade options come online.

Starting out, you need to choose a base knife model. This gets you your frame, liners, backspring, and first set of tools. Here’s a breakdown of the current four models and what they offer. You’ll note that they’re all named for historical figures who reflect the theme of each particular build. 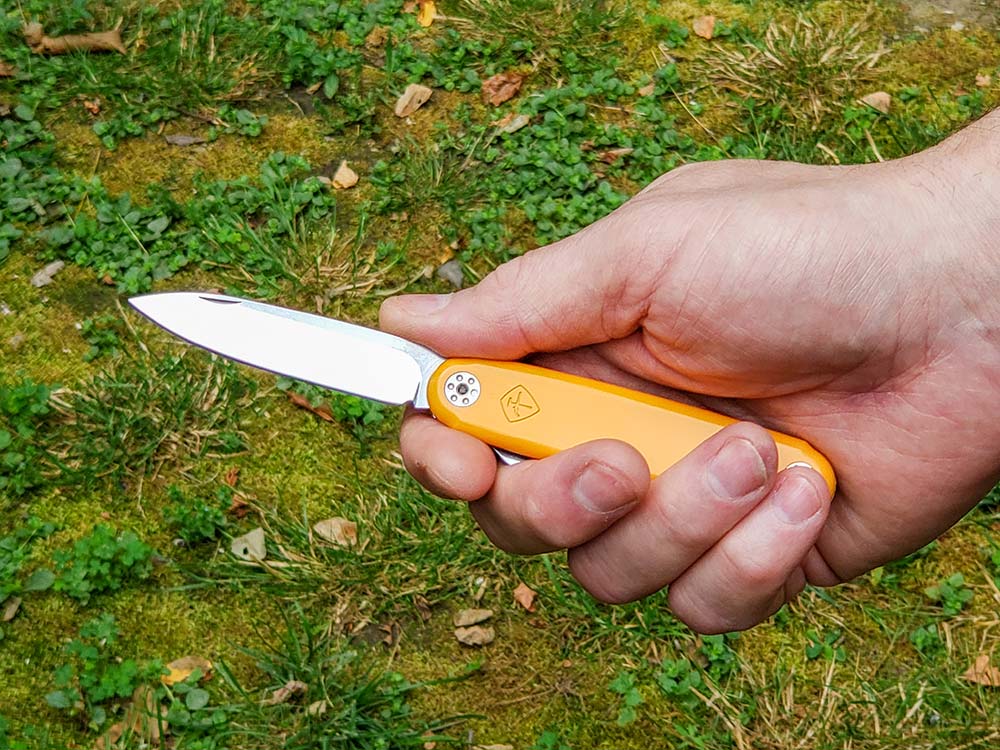 The handles on the ASKs are comfortable with well-rounded edges.

The Jefferson is the model I got for evaluation. It has Grabber Orange handles, a drop point blade, chisel, and a bottle opener with screwdriver tip. This is a pretty general-purpose model, and the tool combo was a good starting point for me.

The Washington has an OD Green handle and a martial theme. It uses a mono-tanto blade, an AR bolt scraper tool, and a combo rangefinder and bottle opener. You never know when you’ll need to see how far away your significant other is before you crack that next beer. The author gave the Magnacut bottle opener a serious workout to test its durability.

The Iron Sides has a Corsair Blue handle with a Seax blade, quarter-turn Dzus fastener blade driver, and the rangefinder bottle opener. Don’t know what a Dzus fastener is? Me neither; that tool is designed for other folks, but it’s there for those who need it.

The last of the four is the Alchesay. It has a Hi-Vis Orange handle, a Wharncliffe blade, a sewing awl, and the rangefinder bottle opener.

In its base mode, you carry an ASK just like you would a SAK. Drop it in your pants or jacket pocket, slip it into the utility pocket on a fixed blade’s sheath, or keep one in your center console in the car. At only 2.4 ounces, it’s easy to carry, and all the edges are nicely rounded. That keeps them from wearing on clothing and makes the knife comfortable in the hand.

The ASK has a pretty strong backspring and the blade and tools all have a positive half-stop position. Those are good features, but I did find that with my short, kind of brittle nails, I had trouble getting the tools open. No problem. I got out the T25 torque driver and just backed off on the screws a turn or so. That still left everything snug but made it easier to open the tools and blade. 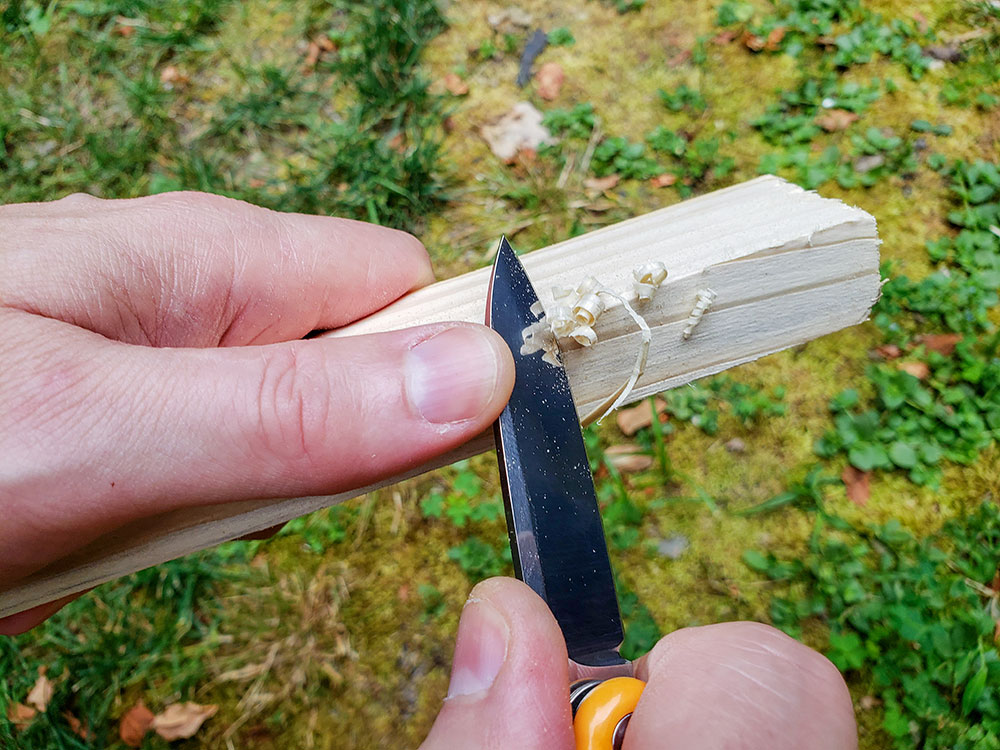 The blade of the ASK came shaving sharp and the edge showed no signs of degradation during the author’s testing. 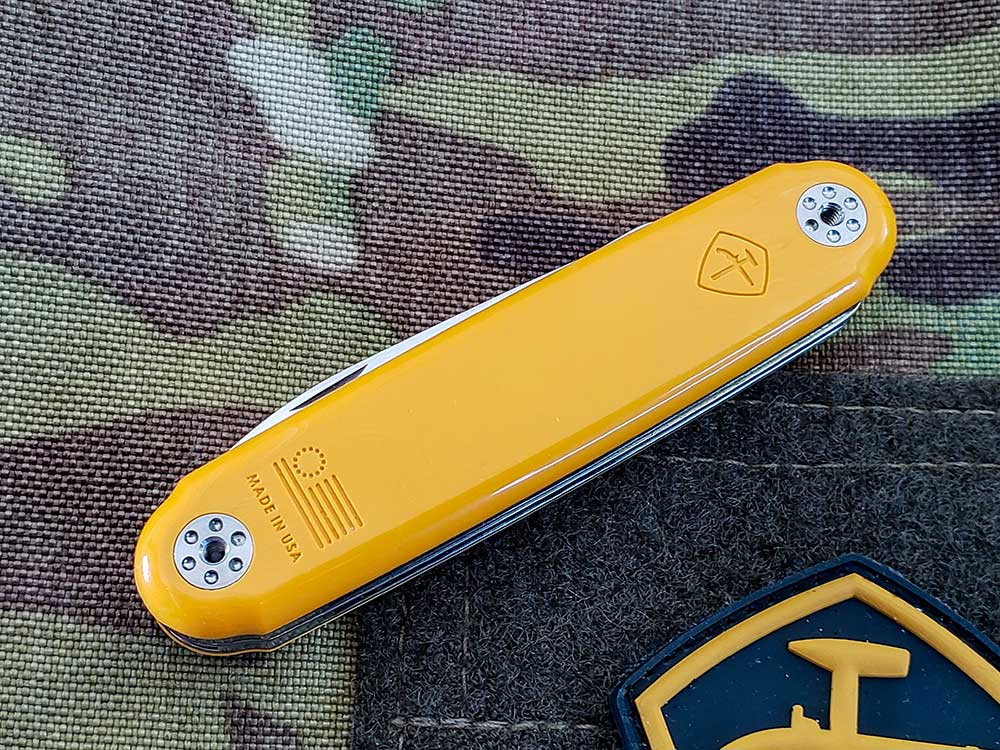 The American Service Knife is 3.7 inches closed, with a lot of nice details that stand out, like the American flag and ASK logo on the scales.

The drop point blade on my Jefferson came shaving sharp. With premium steel, I expect it’ll stay that way for quite some time. I didn’t notice any difference in sharpness over the month and a half I’ve been using the knife, at any rate.

I added the ASK to my EDC rotation and found myself pulling it out for all sorts of impromptu jobs around the house. I was suspicious of how Magnacut would hold up as a bottle opener, so I made sure to give that tool extensive testing. So far so good, but I’m going to keep using it just to be sure.

All in all, function is what you’d expect from a premium multitool from Medford Knives. It’s a solid, well-built and well-engineered tool that will probably get passed down to your kids and maybe your grandkids, too. 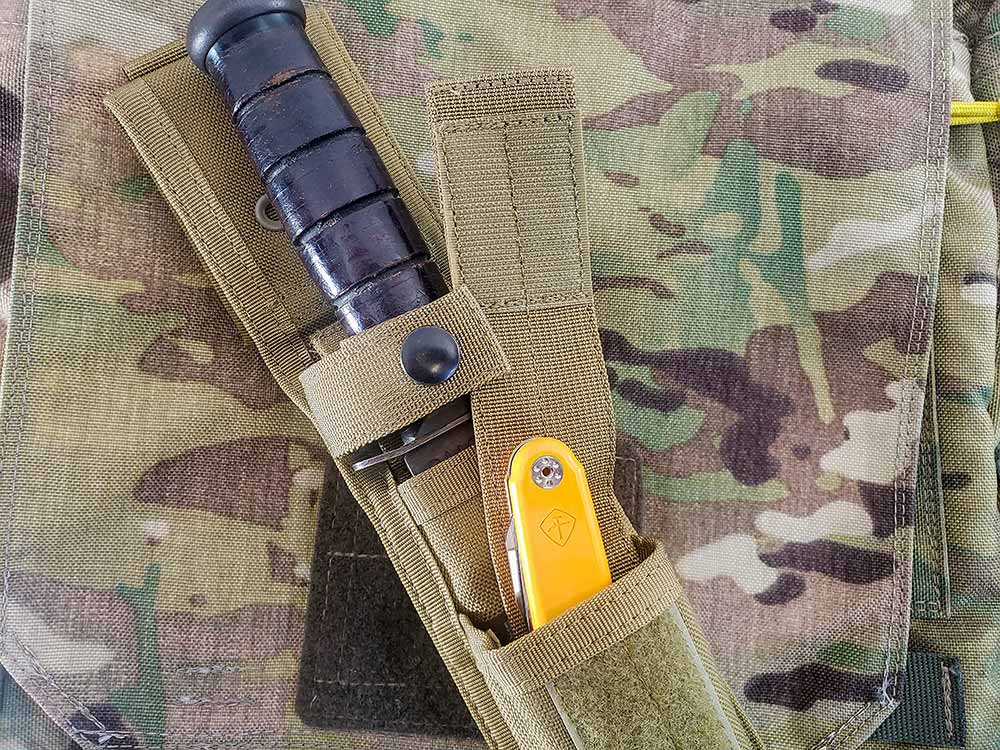 The ASK would make a nice accessory tool to a larger fighting knife. 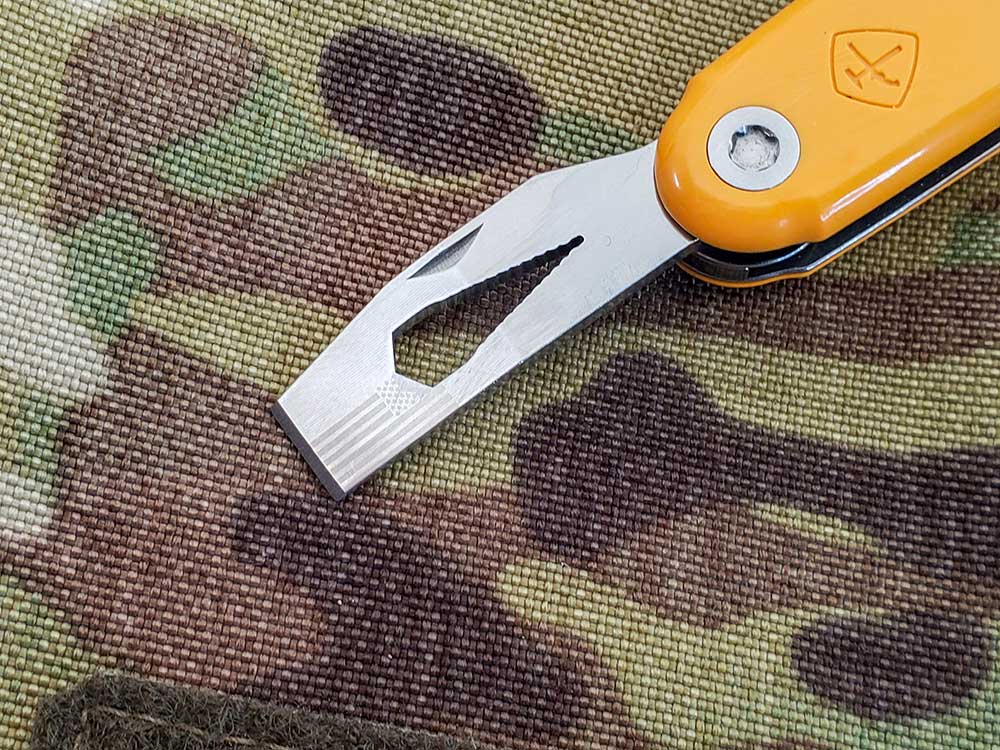 The chisel was one of the tools on the Jefferson model the author tested. Note the American flag. Medford has a number of unique touches like this on the ASK. 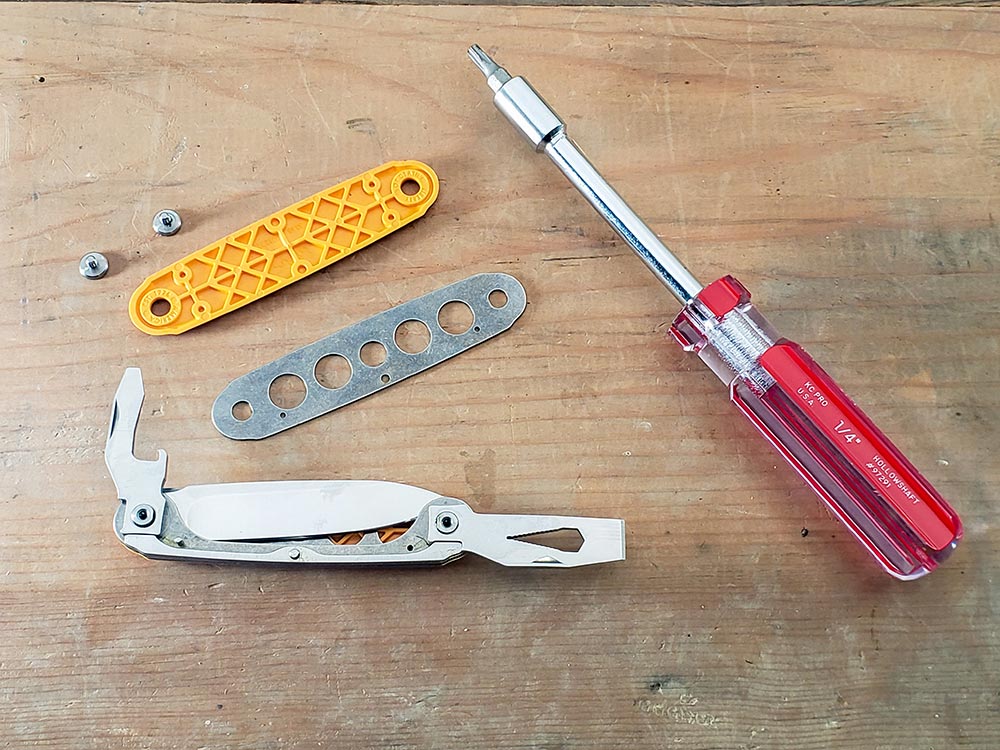 Follow the online video for complete instructions on taking down and swapping out components on the ASK knife. Take a look at the inside parts for some neat Easter eggs hidden there as well.

So is the ASK tool competing with the European Swiss Army Knife? Not really, if you ask me. It’s a tool with similar purpose but it’s a leap beyond in modularity and materials. I don’t think your buyer is going to be the person who would otherwise spend around $30 on a Tinker or a Spartan and call it a day.

But if you’re someone who wants something more, something premium quality that’s tuned just for you, then the handcrafted, USA-made, American Service Knife is just what you need. 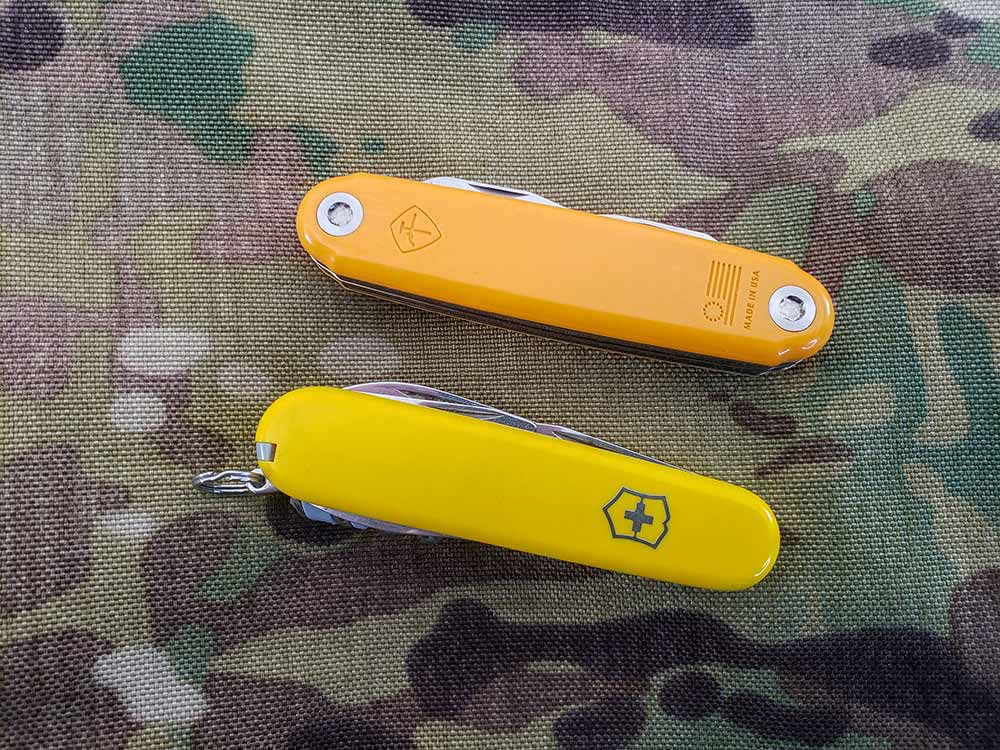 The ASK compares favorably in size to the author’s 91mm Victorinox Spartan. 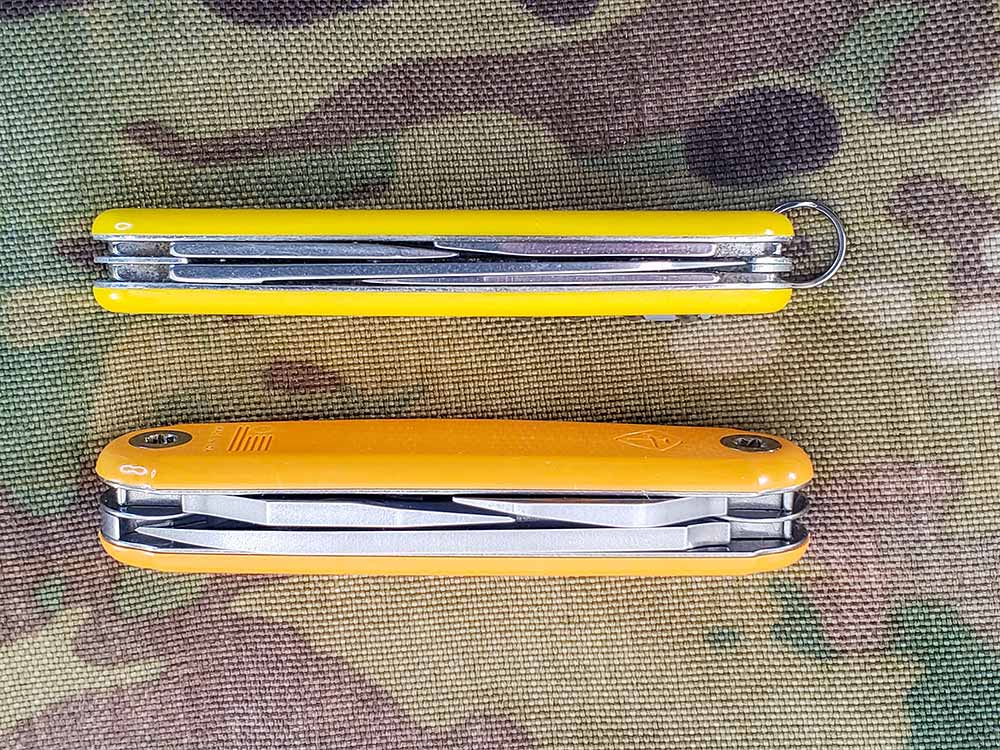 A top-down view shows you how much more robust the ASK blade and tools are compared to a traditional Swiss Army Knife’s.

MODULARITY FOR THE WIN

Victorinox is a juggernaut when it comes to its multi-bladed Swiss Army Knives. The company has been doing what it does for a long time, and it does it well. But how many times have you looked at a Swiss Army Knife and said, I wish it had a different tool?

There is a cottage industry of people who either modify their own knives or will do so for others. If you don’t have the skill to do it yourself, though, you’re going to pay.

Custom tools, blade swaps, and custom handle scales can quickly push the cost of your pedestrian SAK up into the $200 or $300 ranges once you have it where you want it. And you’d better like it, because the custom SAK that you just paid a couple hundred bucks for is going to stay in that configuration unless you want to send it back to the builder and spend some more money to swap it around again.

Even if you do the work yourself, you still need to source parts, and many custom handle scales can run well over $100 alone, let alone if you want an upgraded blade.

Honestly, when I first saw the $240 price tag on the ASK, I was a little thrown. But after thinking about it, when you consider the materials, the design and engineering that went into it, and the fact that you can do all the customization you want right at your kitchen table, the price starts making more sense. Do an internet search on custom Swiss Army Knives and you’ll see what I mean.